in an East German village and beyond

Everyone knows the term Kindergarten. In Germany, it means daycare for 3 to 6-year-old kids. Younger kids go to Kinderkrippe.

In East Germany, daycare was very well organized. There was a spot for every kid. Seriously. The places never closed except for public holidays. And the opening hours were parent/worker friendly from 6 am to 6 pm.

Back then it seemed like a birthright to have day care available and accessible to everyone. Obviously, I know better now. Today it seems more a luxury and it’s not to support the parents but to entertain the kids.

The majority of kids went to both institutions because most women/mothers worked even though it wasn’t a financial requirement. Basic goods were super cheap and available, and to get any non-basic items such as electronics, towels, kitchen items, bananas 🙂 etc. was either related to luck and showing up in stores at the right time or to your very valuable and important connections.

So we all went to daycare and had the same experiences learning the same songs, sharing the same toys and having the same food. It was all about… The same.

The location of our daycare center was rather beautiful. It was in the middle of the woods in the castles’ forest with just trees, a little creek and horse pastures. It was about a 5 minutes walkway from our home. The center itself was more like a trailer park home just bigger.

The things I remember well. Don’t ask me why.

Making flower wreath from daisies in the spring. During the summer, we took our blankets to the little castle hill to take our afternoon naps. I never slept. There was too much to look at… the castle, the giant old chestnut trees providing the shade and there was the sound of the little creek and all the birds. I loved to lay in the grass looking at the sky. In fall, we collected chestnuts and acorns and provided it to the village hunter organization to feed the wild animals mainly deer during the winter. And we had snowball fights and built snowmen during the winter. These are just a few things and I think you get the point. We didn’t miss anything growing up as kids in East Germany. Kids need very little to be happy and are happy with what they have and/or know even the potty training seemed ok 🙂

Potty Training and other natural noises/stinks:
We all set on the sh#t pots at the same time and were well potty trained before we turned one year or right around this age. No one was allowed to get up before finished business. I guess we all set on the pot together several times a day. I don’t remember myself sitting there lined up in a row but I remember seeing the toddlers when I was a bit older.

We were not allowed to make any other human noises or stinks outside the bathroom. If someone farted or there was a smell in the air the offender better raised his or her hand because they would smell you anyway. The daycare staff would sniff through all pants until the guilty was found and put in the corner. I assume but don’t remember whether your timeout in a corner was shorted when you volunteered to announce your misbehavior 🙂

The Life of Me… Why?

“Good bye, Lenin!” a movie which was released in 2003 became one of the first internationally recognized movies about the GDR. I watched it in NYC. I enjoyed it very much and was the only one in the movie theater who was able to sing-along when the kids sang “Unsere Heimat“. Since our school system was very standardized, I am quite sure that every East German knows or at least remembers this song.

If you haven’t see the movie check it out. It’s on Amazon.

However; “The Life of other” left a bigger mark. It was release in 2006. I assume you can see the resemblance to the blog name by now.

This movie I think you have to see, if you are interested in the life that happened behind The Wall. Amazon

I do not want to takeaway the story, since you might want to watch it… but on a very short note about this moving story, it shows people trying to survive in a sick system. There is mainstream which are people who just go along because they are afraid for their own and their families well-being. And there are people who fight independent of the outcome and the impact on their life’s.

We have seen this many times in the past. I hope the current developments in Germany will not end in a repeat of history. We have seen theses politicians not focusing on solutions but maintaining their egos, strengthen their power with bad propaganda using the vulnerability of people to spread hatred. I am a believer and optimist and think we are able to learn and can do better.

My burning question was, why did the system fail?  (Also very simplified, of course… I am not even close to explore any kind of economic system in this blog)

Let’s start with Marx & Engels which I had to study for my BA degree. They were idealists believing that Communism would be the happy state of life for everyone (very simplified 😉 ). They are probably turning in their graves by my ‘summary’ of the book “The Communist Manifesto”.

The GDR never reached this state. We were still, by their definition in the state of Socialism. However; they did not factor in the human beings. The good things about our race which brought us from the stone age to today, eg. our abilities to think, communicate, learn as well as our curiosity and our sense of exploring everything and anything, etc. The bad things which also brought us here, are the drive for power, money, and jealousy and greed. The latter are also our downfalls and the reason for Marx’ & Engels’ dream not ever becoming reality.

It’s us, the very human being holding us back from our ideal state of mind and being. And there are exceptions like Mother Teresa just to name one. These are probably the dreamers and idealists and they will not be able to change the human race with all it’s facets.

Oops… that was an unexpected excurse.

Back to “The Life of others”. I remember that I felt very glad that this movie was made and was close to write a Thank you letter to the makers. I never did but I still feel the same. It shows the good in people even under bad circumstances.

Last but not least, one more item for your watch list. The latest series about the GDR taking over living rooms in Europe “Deutschland 83” set in a divided Germany in the 80s. Only streamed on Hulu but I am sure it will be available on other services as well.

My first steps in East Germany

Ever since I moved to the US I had many people asking me about life in East Germany. It goes like this. Wow, you are from East Germany… What was it like to grow up there? Was it really though? Tell me; what was it like?

And then I start my stories getting more and more questions. People always seem to be amazed. That’s why I started this blog. It will be my perspective and my experiences about the life behind the wall. It’s to share some history and maybe even to educate.

Well, let’s start with… it wasn’t all that bad as a child I guess even though I had some tough times but also loads of fun.

I’ll go back as far as I remember… Our first home.

I spent the first 6 years of my life (1966 – 1972) in a house that belong to lets say the ranger and hunter of the castle owner before WW2. Yes, our village had little castle.

The village / government owned the house when I lived there with my family, my parents and a 3.5 years older brother. 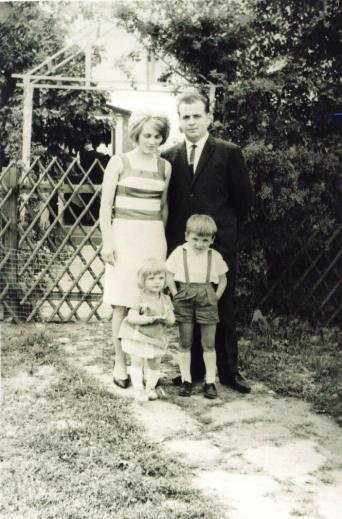 We shared the house with 3 other families. We had a tiny apartment with a kitchen, a living and a bed room. The indoor bathroom was shared with all families. It had a real WC and a bath tube. A serious luxury I learned a little later in life. The water was heated via a coal oven and it took several hours for the water to warm up. Therefore we bathed on weekends only and the water was shared. Imaging, the same bathing water was used by several people. It was more or less in and out mainly to wash your hair. And yes, there were outhouses which the adults used to go to.  Little did I know…

The sleeping situation was solved by carrying my brother to the living room couch when my parents went to bed. My little bed was in my parents bed room but I slowly got to big for it. More to come…